Dreams of Gods and Monsters by Laini Taylor 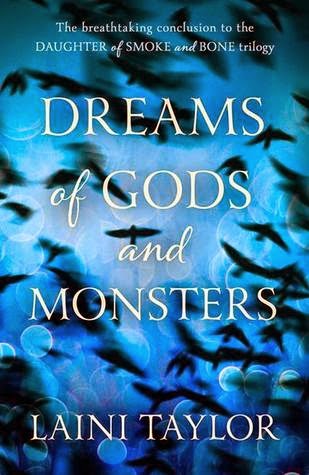 By way of a staggering deception, Karou has taken control of the chimaera rebellion and is intent on steering its course away from dead-end vengeance. The future rests on her, if there can even be a future for the chimaera in war-ravaged Eretz.

Common enemy, common cause. When Jael's brutal seraph army trespasses into the human world, the unthinkable becomes essential, and Karou and Akiva must ally their enemy armies against the threat. It is a twisted version of their long-ago dream, and they begin to hope that it might forge a way forward for their people. And, perhaps, for themselves. Toward a new way of living, and maybe even love.

But there are bigger threats than Jael in the offing. A vicious queen is hunting Akiva, and, in the skies of Eretz ... something is happening. Massive stains are spreading like bruises from horizon to horizon; the great winged stormhunters are gathering as if summoned, ceaselessly circling, and a deep sense of wrong pervades the world.

What power can bruise the sky? From the streets of Rome to the caves of the Kirin and beyond, humans, chimaera and seraphim will fight, strive, love, and die in an epic theater that transcends good and evil, right and wrong, friend and enemy. At the very barriers of space and time, what do gods and monsters dream of? And does anything else matter?

I'm not entirely sure where to start! I lost myself in this book, this monster of a book that took me a week to read, and I loved every last page of it. Taking place moments after DoBaS finished with Jael's army of angels flying onto Earth, it seems that the shit has hit the fan. Earth is scrambling to make sense of these religious figures appearing, and the chimaera and the seraphim have been forced to make unlikely allies to fight a more pressing enemy. From the very offset, this story was tense with the possibility of betrayal, and it often did happen but somehow, Karou's strength as well as chimaera and seraphim alike desire to live pulled everything together. Moments were tough, on the sands where Akiva met with the White Wolf, in the Kirin caves where they made plans, in Vatican City where Jael was bending humans will to his own.

As per usual, it seemed to be up to Karou and Akiva to be the calm voices of reason amidst all this turmoil. I adored Karou's idea of fighting without the bloodshed, and maybe I wanted a bit more of a dramatic final fight, the fighting we did get was brutal and honestly I don't think I could have handled much more. And on the other hand, I definitely wanted more Karou-and-Akiva moments but with everything going on, I could understand the need for higher priorities. But we did get plenty of Zuzana and Mik adorable-ness; they both proved themselves to be worthy and helpful and ingenious alongside Karou's fight and of course we got some amazing examples of Zuze's wit. Speaking of cute couples... should I say? Oh yeah, I have to, Ziri and Liraz both deserve that happy ending. And oh my God, this particular happy ending made my heart burst!

Oh, but so much more information than my head could take! Don't get me wrong, this is a five-star review and an amazing book but adding more secondary characters and more back story at the end? It was a little too much and almost (luckily not quite) ruined the neat-and-tidy ending. Saying that, I can't complain much, I did really enjoy hearing from other characters and Eliza especially was sweet and a bit of an enigma that was a joy to watch unfurl. Everything had a purpose and even though some weren't revealed for chapters, some the next page, everything slotted together so very nicely; from its betrayals to its deaths, their touching moments to their sore ones, this book came together to make an epic conclusion to an amazing story. One that I have loved and will sorely miss.