Girl About Time by Kerstin Gier 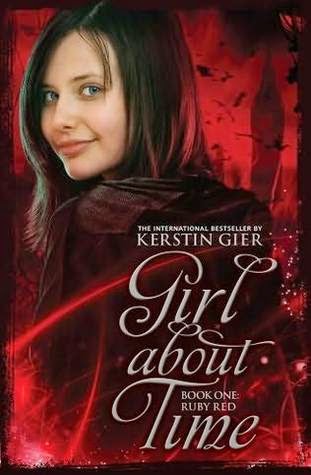 Every family has secrets. But what do you do if you find out that you are the family secret. That's what happens to Gwen when she finds herself unbelievably transported from out on the town to turn of the century London. It's enough to make any girl dizzy.

Gwyneth just wants to be normal. Unfortunately that is difficult to do when her cousin is preparing to travel back in time for the first time, as a result of a genetic anomaly and family trait. Trailing behind the impressiveness that is her cousin Charlotte, Gwyn is unprepared and more than a little shocked to find out that she is the one that inherited the time-travel gene.

I adored this original and funny take on time-travel - a gene passed through special families, relying only on old predictions on who the next time traveler would be. There were also conspiracies and secrets about the two families and their powers. However, as much as I liked the storyline, the narrative was a little young for me; even though the protagonist is 16, Gwyn's voice sounded about 12. She was a little immature, sure, but it made it difficult to connect with her.

Then there was Gideon, the most recent time traveler of the parallel family. Frustrating, stubborn and pretty hot but knew it, Gideon, like Charlotte, had been preparing for traveling in time to complete the mission all his life; needless to say, he is less than impressed with Gwyn's fumbling around. I could never quite figure Gideon out, one minute he was being quite sweet and considerate, the next the world's biggest douche. The plot was well written and organised but very much the first part of a trilogy, with many questions left unanswered, and as someone who likes answers, this was incredibly annoying! So even though it reminded me of old Meg Cabot books I read when I was 15, I still really enjoyed it and will happily continue the trilogy.