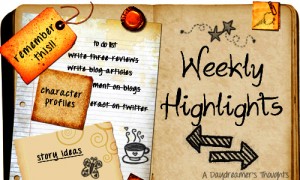 Weekly Highlights is a feature borrowed from Faye of A Daydreamer's Thoughts, where I get to highlight my posts of the week, show you my new books and talk about bookish things! Nothing too fancy this week, a couple of reviews and two new books :)

Pushing the Limits by Katie McGarry - will probably finish this today, it is an incredibly moving story.

Never Bite a Boy on the First Date by Tamara Summers

I've got a few issues: I'm a vampire now. One of my classmates was found dead, with telltale fang marks. I didn't do it! (really!) Nobody believes me, so . . . I'm going to have to find the real killer. I've already got three suspects. (three very cute suspects.) One more problem: I am seriously falling for one of them . . . but what if he's the killer?

A good find from the library, I've sort of started this, but got distracted by Pushing the Limits! But good so far, about 80 pages in.

It’s Spring Break of senior year. Anna, her boyfriend Tate, her best friend Elise, and a few other close friends are off to a debaucherous trip to Aruba that promises to be the time of their lives.But when Elise is found brutally murdered, Anna finds herself trapped in a country not her own, fighting against vile and contemptuous accusations. As Anna sets out to find her friend’s killer, she discovers harsh revelations about her friendships, the slippery nature of truth, and the ache of young love.Awaiting the judge’s decree, it becomes clear to Anna that everyone around her thinks she is not only guilty, but also dangerous. And when the whole story comes out, reality is more shocking than anyone ever imagined...

Another hand-me-down from Sophie as she loved it so much she ordered herself a pretty new hardback! So I got the proof to read with her assurances that it was amazing!
Posted by Anya at 10:11