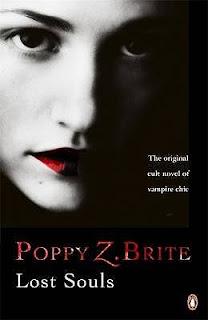 Publisher: Penguin
Published: 10th September 1992
Pages: 384
Synopsis:
At a club in Missing Mile, N.C., the children of the night gather, dressed in black, looking for acceptance. Among them are Ghost, who sees what others do not. Ann, longing for love, and Jason, whose real name is Nothing, newly awakened to an ancient, deathless truth about his father, and himself.Others are coming to Missing Mile tonight. Three beautiful, hip vagabonds - Molochai, Twig, and the seductive Zillah (whose eyes are as green as limes) are on their own lost journey; slaking their ancient thirst for blood, looking for supple young flesh.They find it in Nothing and Ann, leading them on a mad, illicit road trip south to New Orleans. Over miles of dark highway, Ghost pursues, his powers guiding him on a journey to reach his destiny, to save Ann from her new companions, to save Nothing from himself...

Lout Souls is another book for university, a modern Gothic module and one I actually looked forward to reading. Vampires and mad teenage Goths? Duh! And while I wasn't disappointed in this respect, I was unprepared for how weird this book really is. Initially a gripping read, it didn't lose its charm but any innocence I once had has vanished!

All the characters are either vampires or just plain screwed up. Take Nothing: a half-vampire child that has been abandoned because he killed his mother from the inside; feeling isolated, he runs away to New Orleans and bumps into three young-forever vampires that party in a black van. He then proceeds to get drunk, do drugs and have some sort of sexual encounter with everyone he comes across, including Zillah. Half way through, they find Christian, one of the only characters I actually liked and was sorry to see go, who makes the connection that Nothing is Zillah's son. And then they continue to have sex. Yeah... Zillah was incredibly weird and unnecessarily cruel. Did not like him.

The other part of the story was Steve, Ghost and Ann. The two boys form a band 'Lost Souls', and Ann is Steve's ex. There is an awful back-story to their relationship that I won't go into but will just say no matter how much of a bitch Ann was, I was still on her side. Ghost was the other character I honestly liked, a strange young man with the ability to see ghosts and hear thoughts. As if this book wasn't odd enough!

Full of random sex with strangers, doing drugs for the hell of it and killing your old friend because your new possessive lover told you to, this is not one for the light hearted. But definitely worth it for the fantastic embodiment of Goth 90's teenagers and the true Gothic horror.
Posted by Anya at 17:25