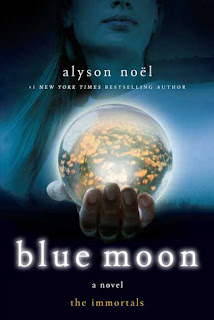 Publisher: St Martins Press
Published: 7th July 2009
Pages: 289
Synopsis:
Just as Ever is learning everything she can about her new abilities as an immortal, initiated into the dark, seductive world by her beloved Damen, something terrible is happening to him.  As Ever’s powers are increasing, Damen’s are fading—stricken by a mysterious illness that threatens his memory, his identity, his life.

Desperate to save him, Ever travels to the mystical dimension of Summerland, uncovering not only the secrets of Damen’s past—the brutal, tortured history he hoped to keep hidden—but also an ancient text revealing the workings of time. With the approaching blue moon heralding her only window for travel, Ever is forced to decide between turning back the clock and saving her family from the accident that claimed them—or staying in the present and saving Damen, who grows weaker each day...


Review:
This took me so long to read because I was actually a little reluctant to pick up the book! I really like the idea of this book, just like the first one, but again, there were too many little annoyances for me to really enjoy it. I think mostly it was that I do not believe their love story. Which is probably why I was getting more than annoyed with Ever's insecurities, no matter how possible and utterly teenager-y they were. Also the reason I laughed rather than getting my heart broken when Damen forgot who she was. Does that make me  mean?

Ever is still not my favourite heroine. She has flaws that only make her more annoying, not more easy to relate to. And while I'm at it, why in the hell does she trust Roman at the end after all the shit he's put her through? What an idiot. And! Why does she still go back to her family, knowing it won't work, knowing she's leaving Damen behind?

Onto the side-kicks. Haven and Miles irritated me more in the sequel than the original - they are so stereotypical and two-faced and petty, it gives a bad name to teenagers. They both have such potential to be great friends to Ever in her time of need, even before they had no choice because of Roman's mind games. Not to forget Ava. I really liked her, she had heart and humour and good senses, why did Noel have to make her so selfish and weak in the moment of truth?

Roman gave the overall impression of being a good villain. There were moments, mostly at the end with his either really good or really bad acting, that he disappointed me but still, a bad boy with a British accent? Awesome! But since when do British guys sound like pirates?

Again, the story had potential but the lack of character development ruined the read for me. Good for young teens, not so good for those of us who have actually grown up.
Posted by Anya at 17:00