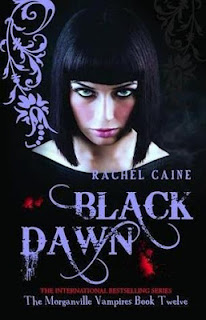 Publisher: Alison and Bubsy
Published: 1st May 2012
Pages: 350 scrap that, my book says just over 500
Book Cover's Synopsis:
When a tide of ferocious draug, the vampire's deadliest enemy, floods Morganville, its eclectic mix of residents must fight to save their town from devastation.
Chaos has taken over the quiet college town of Morganville as the threat of the draug rapidly spreads with the help of the city's water system. Whilst most of the locals have already fled, student Claire Danvers and her friends Shane, Eve and Michael choose to stay and fight.
Things take a turn for the worse when vampire Amelie, the town's founder, is infected by the master draug's bite. Unless Claire and her friends can find an antidote to save Amelie and overcome the draug, Morganville's future looks bleak...

Review:
The twelfth in the Morganville series throws you right back in the action, picking up where Last Breath left off. My heart did not stop rapidly beating all the way through this book - I literally couldn't put it down, finished in two sittings! The blurb is kind of misleading - Claire and crew are more concerned with surviving - not to mention salvaging their relationships. If you can remember, Michael lost control at the end of Last Breath and nearly drained Eve. Needless to say, they have some issues to work through that takes some time. And Claire almost loses Shane to the draug in a terrifying battle that leaves him... mentally unstable. Even more than usual. And let me just say: watch out for chapter seven. It actually broke my heart.

There was an incredible amount of action in this latest instalment, with even more perspectives, including Oliver's, Hannah Moses' and Naomi's - Amelie's vampire sister - to take you through every part of action and madness that is taking over Morganville.

One of the reasons I love this series so much is Myrnin, the mad vampire scientist. He has some of the best lines and the most adorable interactions with Claire. Don't get me wrong, I'm Team Shane, but I still awwed when Myrnin called Claire 'cherub'. Their relationship became somewhat strained after Myrnin forced them all to leave Shane behind - Eve herself noted that Myrnin put Claire's life above all others. Which says something about how he's grown and I wonder if Caine is going anywhere with this.

Now, the draug. This is quite possibly the best plot-line ever. Of all time. They are so terrifying, especially to be something the vampire's are scared off. Not even Myrnin can truly face up to them, which is saying something.

No matter what I say about this series, I cannot do it justice. So let's just summarise with: poor Amelie. And, holy crap! And, eww! And, new rules in Morganville does not bode well!
Posted by Anya at 11:32