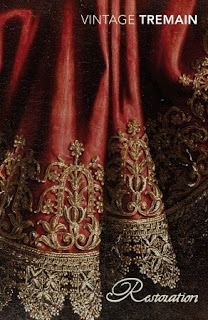 Publisher: Vintage
Published: 4th August 2009
Pages: 416
Synopsis (Goodreads): Robert Merivel is a dissolute young medical student when an accident of fate leads him to the attention of King Charles II. Finding favour with the King, Merivel embarks on the time of his life, enthusiastically enjoying the luxury, women and wine of the vibrant royal court, until he is called upon to serve his monarch in an unusual role. However, when he fails at the one thing the King demands of him he is cast out from his new-found paradise.

Determined to be restored to the King’s favour, Merivel begins a journey to self-knowledge that takes him to the depths of seventeenth-century society.

Review:
I understand that this novel delves into the workings of the seventeenth century society, successfully describing the personal rise and fall of Merivel, in my opinion anyway. And yet, it was funny. Merivel is essentially a nearly-forty year old man-whore, if you excuse my language, falling "in love" or at least in lust with women a plenty.

The novel illustrates the rise and fall and rise - kind of - of Merivel with the King, Charles II and his one true friend John Pearce. While some parts are truly touching, for example Merivel's encounter with Whittlesea, an Early Modern Insane Asylum, some parts appear ridiculous, at least to a modern reader, describing Merivel's interesting choices of interior decorating or coat design. And of course the crude curse words and the squeamish event of touching a live beating heart.

Merivel's character himself is somewhat, shall we say, ambiguous. There are times when you really begin to dislike him, for behaving so poorly to women, conducting himself with no grace what so ever in front of the King or for generally being selfish. But, as I said earlier, there are some touching moments, a few losses that hurt, the fall that tries to successfully change him from the selfish to the selfless.

All in all, an enjoying read, that I admit took a while, but was satisfying none the less. I will leave you to try and decipher the surreal ending.