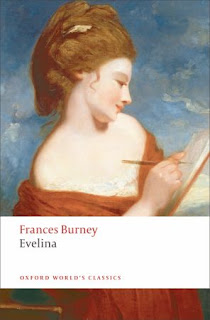 Publisher: Oxford University Press
Published: 15th December 2008
Pages: 455
Synopsis (Goodreads):
Frances Burney's first and most enduringly popular novel is a vivid, satirical, and seductive account of the pleasures and dangers of fashionable life in late eighteenth-century London. As she describes her heroine's entry into society, womanhood and, inevitably, love, Burney exposes the vulnerability of female innocence in an image-conscious and often cruel world where social snobbery and sexual aggression are played out in the public arenas of pleasure-gardens, theatre visits, and balls. But Evelina's innocence also makes her a shrewd commentator on the excesses and absurdities of manners and social ambitions--as well as attracting the attention of the eminently eligible Lord Orville. Evelina, comic and shrewd, is at once a guide to fashionable London, a satirical attack on the new consumerism, an investigation of women's position in the late eighteenth century, and a love story. The new introduction and full notes to this edition help make this richness all the more readily available to a modern reader.


Review:
Evelina, the story of a somewhat typical country girl thrust into London society without a clue what to do when she's there. Another book for university, I enjoyed this one more so than the others. This is possibly because, even though Evelina is incredibly naive, she has the most funny and endearing moments. These silly moments usually caused me to yell at the book because her gullibility can be annoying to a modern young woman. Actually, I yelled at Sir Clement quite a lot too... but that's because he's - well, I wouldn't want to ruin it!


The epistolary style gave it a confessional and somewhat biased tone, but that's because all letters are to or from Evelina, giving the reader an insight into her innocent mind. Ah, if only the world was that simple! And of course, there were moments that were a bit slow - but what do you expect from an in-depth description of a boring dinner conversation?


One last thing, I believe: Lord Orville. Even though you do only see him through Evelina's rose-tinted glasses, you will love him. He is sweet and considerate to Evelina's social blunders, subtly ignores her slip-ups and confesses his love for her before he finds out about her true family. He made the book worth it!
Posted by Anya at 15:38

Email ThisBlogThis!Share to TwitterShare to FacebookShare to Pinterest
Labels: classic