Weekly Highlights: the 'It's All Good' edition 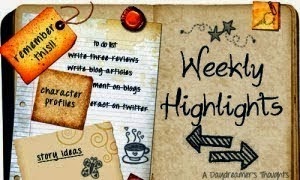 It hasn't been that long since you heard from me so not a lot to report. I went for a job interview but was turned down - kind of annoying but I've got a lot of overtime coming up at Waterstones so I'm happy. I'm working the next 3 weekends, which is kind of annoying but think of the money, and as The Fiancée said: we don't have to celebrate valentines on the day.

Currently Reading
Bound By Flames, the third in the Night Prince series - I love me some Vlad! Details below.

Bound By Flames by Jeaniene Frost
Leila’s years on the carnie circuit were certainly an education. What she didn’t learn: how to be a vampire, or how to be married to the most famous vampire of them all. Adjusting to both has Leila teetering on a knife edge between passion and peril, and now the real danger is about to begin…

Vlad must battle with a centuries-old enemy whose reach stretches across continents and whose strength equals his own. It isn’t like Vlad to feel fear, but he does…for Leila, because his enemy knows she is Vlad’s greatest weakness. As friend and foe alike align against him—and his overprotectiveness drives Leila away—Vlad’s love for his new bride could be the very thing that dooms them both…

It took its time getting to me but I can finally read it! I adore this series so much and am already getting stuck in.

The Shadow Cabinet by Maureen Johnson

Grieving, shaken, and feeling very much alone, Rory's life as a member of the Shades of London has changed irrevocably. It's only been a matter of hours since Stephen was taken from her, possibly for ever. Her classmate Charlotte is still missing, kidnapped by the same people who tried to take Rory. Rory is no longer a schoolgirl haplessly involved in the dealings of a secret government unit. She is their weapon in a matter of life and death.

With hardly a moment to think for herself, Rory is back to work. Charlotte must be found -- as must Stephen, if he is even out there. Lines must be drawn and forces rallied. Something is brewing under London, something bigger and much more dangerous than what has come before. The Shadow Cabinet holds the key to everything, and it is up to Rory to unravel its mysteries before time runs out...

Yes! I requested this as soon as I could, I love these books so much. I've already read it, it was incredible! Thank you Hot Key!

Seventeen-year-old Twylla lives in the castle. But although she’s engaged to the prince, Twylla isn’t exactly a member of the court. She’s the executioner.As the Goddess embodied, Twylla instantly kills anyone she touches. Each month she’s taken to the prison and forced to lay her hands on those accused of treason. No one will ever love a girl with murder in her veins. Even the prince, whose royal blood supposedly makes him immune to Twylla’s fatal touch, avoids her company.But then a new guard arrives, a boy whose easy smile belies his deadly swordsmanship. And unlike the others, he’s able to look past Twylla’s executioner robes and see the girl, not the Goddess. Yet Twylla’s been promised to the prince, and knows what happens to people who cross the queen.However, a treasonous secret is the least of Twylla’s problems. The queen has a plan to destroy her enemies, a plan that requires a stomach-churning, unthinkable sacrifice. Will Twylla do what it takes to protect her kingdom? Or will she abandon her duty in favor of a doomed love?

This is Waterstones Love this month, so I borrowed the copy from the staff room because it sounds amazing!
Posted by Anya at 10:00