The Worst Girlfriend in the World by Sarra Manning 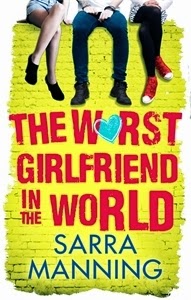 My best friend was now my deadliest enemy, the one person I'd hate beyond all measure for the rest of my life . . .

Franny Barker's best friend, Alice, is the worst girlfriend in the world according to the many boys of Merrycliffe-on-Sea. She toys with them, then dumps them. But she'll never dump fashion-obsessed Franny. Nothing and no one can come between them.

Not even tousle-haired rock god, Louis Allen, who Franny's been crushing on hard. Until Alice, bored with immature boys and jealous of Franny's new college friends, sets her sights on Louis. Suddenly, best friends are bitter rivals.

Is winning Louis's heart worth more than their friendship? There's only one way for Franny to find out.

Another amazing contemporary from the brilliant mind of Sarra Manning, whom I am developing quite a girl crush on! This one tells of best friends since forever, Franny B and Alice, completely inseparable until Franny goes to college and leaves Alice at sixth form. Not such a big deal, if it wasn't for Alice alienating everyone else in town for her attitude towards boys as her playthings.

I adored everything about this story, from its rich and varied characters to the up and downs of friendship. Franny B was especially adorable and very strong; from her conviction that she was going to succeed in fashion to her looking after her mum with depression, Franny B was an amazing character with such a tough lot in life and while she did complain and did throw one heck of a tantrum when it became too much, she was incredibly collected. I wish I was that cool when I was her age!

Everyone knows or knew someone like Alice, especially in their teens. Someone with no regard to rules or convention, pretty big ego, doesn't care what anyone thinks of her because it doesn't matter, she's got the one great friend that sticks up for her. Until she doesn't and everything hits the fan, Alice lashes out the only way she knows how: by getting the guy. While I could completely understand Alice and Franny B's friendship, and did very much idolise it, Alice lashing out was the stupidest thing I had ever seen. I simultaneously wanted to hug and smack her!

Now for the guys. First up, Louis, lead singer of local band. He was pretty good looking but as we got to know him, even Franny B with the world's biggest crush on him removed the rose-tinted glasses and realised what a huge dork he was. I mean he was adorable and very funny but he was a big goof and had no brain to mouth filter, which made him excellent best-guy friend material, not so much boyfriend. And then there was Francis, the grumpy technician and bass player. I knew from the offset he would be important to Franny B, if only in realising not to judge a book by its cover. But he was pretty damn cool, with his strange knowledge of sixties films and weird YouTube videos, and perfect for Franny B. If only she realised it!

Another hit from Manning; for fans of contemporary, romance, friendship versus guys, or indeed Sarra Manning (which was I picked it up), I promise you'll love it as much as I did.

Published 1st May 2014 by Atom. Thank you to the publisher and Netgalley for my copy in exchange for an honest review.
Posted by Anya at 09:00