Weekly Highlights: the 'no will power' edition 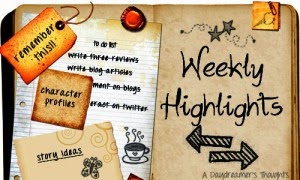 
Been a good week on the book front, and even a bit better on the job front! Had a bit of a book frenzy on Monday, bought one and got two more from the library! And then I also got two more ebooks on Netgalley... yeah, I have no will power, but in my defence the ebooks were pre-approved!

Currently Reading
Still halfway through Unnatural Creatures but I've decided to leave that for Hallowe'en. I have started Hopeless by Colleen Hoover, an ebook that's been sat on my kindle for a while, which is amazing so far. This weekend I'm also having a binge-read of Skulk by Rosie Best, which comes out next week.

On My Bookshelf
Geekhood: Close Encounters of the Girl Kind by Andy Robb

If you haven't worked it out yet, girls don't do this. They don't come to the Hovel. They don't like goblins and dragons. They don't paint miniatures. They don't play role playing games or re-enact fictional battles. And they don't talk to Geeks like me especially if they're pretty. And this girl is pretty. What do you do if you're a fourteen-year-old Geek, and a Beautiful Girl has appeared in the midst of your geeky world? And she seems to like you... For Archie, the natural reaction would be to duck and cover ... run for the hills ... buy a new model elf... Anything but risk stepping into the Real World. But even Geeks have to put their heads above the parapet at some point. With his mum barely able to contain her excitement that her son is about to join the human race, and his step-father, Tony the Tosser, offering crass advice, it's time for Archie to embark on a daring Quest to win the Beautiful Girl's heart and shake off his Geekhood for good...

A good find in the library, especially as I am meeting him tomorrow night! Read it already, review to come soon.

Posing as one of Robin Hood's thieves to avoid the wrath of the evil Thief Taker Lord Gisbourne, Scarlet has kept her female identity secret from all of Nottinghamshire. Only Robin and his band know the truth. As Gisbourne closes in, helping the people of Nottingham could cost Scarlet her life, but her fierce loyalty to Robin-whose quick smiles have the rare power to unsettle her-keeps Scarlet going and makes this fight worth dying for.

I have no idea where I first heard of this but I've had my eye on it for months and I spotted it in my library!

Eleanor and Park by Rainbow Rowell

Eleanor is the new girl in town, and with her chaotic family life, her mismatched clothes and unruly red hair, she couldn't stick out more if she tried.Park is the boy at the back of the bus. Black T-shirts, headphones, head in a book - he thinks he's made himself invisible. But not to Eleanor... never to Eleanor.Slowly, steadily, through late-night conversations and an ever-growing stack of mix tapes, Eleanor and Park fall for each other. They fall in love the way you do the first time, when you're young, and you feel as if you have nothing and everything to lose.

Saw this in Waterstones and picked it up with no hesitation! Quickly becoming a Rainbow Rowell fangirl!

Crash Into You by Katie McGarry

The girl with straight As, designer clothes and the perfect life-that's who people expect Rachel Young to be. So the private-school junior keeps secrets from her wealthy parents and overbearing brothers...and she's just added two more to the list. One involves racing strangers down dark country roads in her Mustang GT. The other? Seventeen-year-old Isaiah Walker-a guy she has no business even talking to. But when the foster kid with the tattoos and intense gray eyes comes to her rescue, she can't get him out of her mind. Isaiah has secrets, too. About where he lives, and how he really feels about Rachel. The last thing he needs is to get tangled up with a rich girl who wants to slum it on the south side for kicks-no matter how angelic she might look. But when their shared love of street racing puts both their lives in jeopardy, they have six weeks to come up with a way out. Six weeks to discover just how far they'll go to save each other.

I'm almost 100% certain that this is the US cover but better than nothing! I am so looking forward to this, I love McGarry's writing. Thank you Mira and Netgalley!

Are you more than the number on the back of your neck?For Kitty Doe, it seems like an easy choice. She can either spend her life as a III in misery, looked down upon by the higher ranks and forced to leave the people she loves, or she can become a VII and join the most powerful family in the country.If she says yes, Kitty will be Masked—surgically transformed into Lila Hart, the Prime Minister’s niece, who died under mysterious circumstances. As a member of the Hart family, she will be famous. She will be adored. And for the first time, she will matter.There’s only one catch. She must also stop the rebellion that Lila secretly fostered. The same one that got her killed…and one Kitty believes in. Faced with threats, conspiracies and a life that’s not her own, she must decide which path to choose—and learn how to become more than a pawn in a twisted game she’s only beginning to understand.

How awesome does this sound? Another great title by Mira Ink. Thank you Mira and Netgalley for my e-copy!
Posted by Anya at 09:00