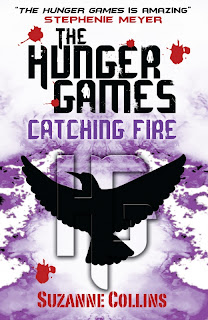 Published: Sept 7th 2009
Pages: 472
Goodreads Synopsis:
Against all odds, Katniss Everdeen has won the annual Hunger Games with fellow district tribute Peeta Mellark. But it was a victory won by defiance of the Capitol and their harsh rules. Katniss and Peeta should be happy. After all, they have just won for themselves and their families a life of safety and plenty. But there are rumors of rebellion among the subjects, and Katniss and Peeta, to their horror, are the faces of that rebellion. The Capitol is angry. The Capitol wants revenge. Suzanne Collins continues the amazing story of Katniss Everdeen in Catching Fire, the second novel of the phenomenal Hunger Games trilogy.

Review:
Just as addictive as the first, just as unable to put it down! The hatred I felt for the Capitol in the first was nothing to what I felt throughout Catching Fire; my heart broke a little with every horrible thing President Snow said or did to Katniss or Peeta and I willed them on all the more. The plot twists kept me guessing and on the edge of my seat, with some of them pretty horrible.

Even though Katniss and Peeta's relationship is hardly conventional, I'm a romantic and even hated Gale a little bit for confusing Katniss - it's hard enough for her to distinguish between reality and the Games with Peeta last year and you had to make it worse? Unbelievable!

One last thing, I did not appreciate the cliffhanger ending and honestly did not see the major twist coming! It just makes me want to read the next one - so that's what I'm going to go do!
Posted by Anya at 09:20